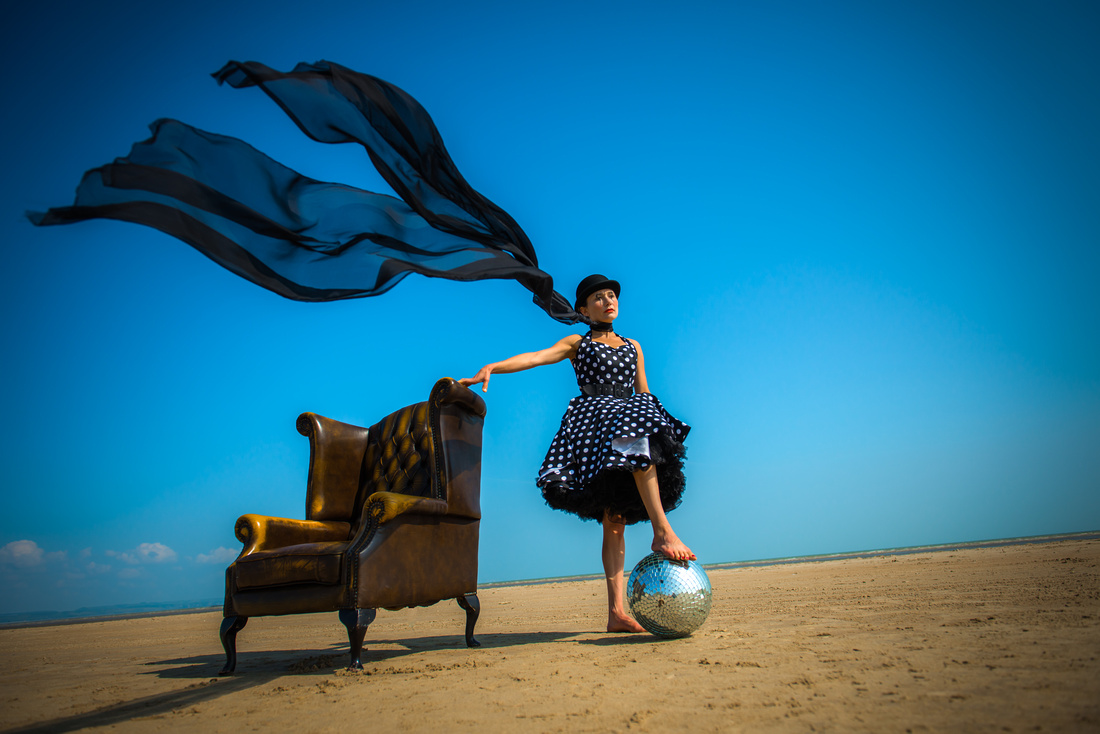 I saw a film in the cinema a while back called The Duke Of Burgundy directed by Peter Strickland. I was completely blown away by it and especially by one of the lead actresses Chiara D'Anna.

I decided to see if I could get in contact with her, I thought she'd be a wonderful model to photograph. Chiara's Italian but turned out she was based in London not too far away from me. I was lucky enough to get in contact with her and she agreed to meet me for a coffee in South Kensington to discuss my shoot ideas.

It's a surreal experience seeing someone in a film you love and then to have them meet you for coffee. Chiara was a delight to talk to was happy to go ahead with the shoot I'd proposed to her.

The shoot was to take place at two locations, the first Greatstone Beach in Kent and the second at Unicorn Restorations near Redhill in Surrey. Greatstone is an enormous beach but quite out of the way so you feel you have this huge expanse of sand leading to the sea just for yourself. Unicorn Restorations restores old red phone boxes and has a yard full of them in all sorts of levels of decay to provide a fantastic backdrop for the second half of our shoot. 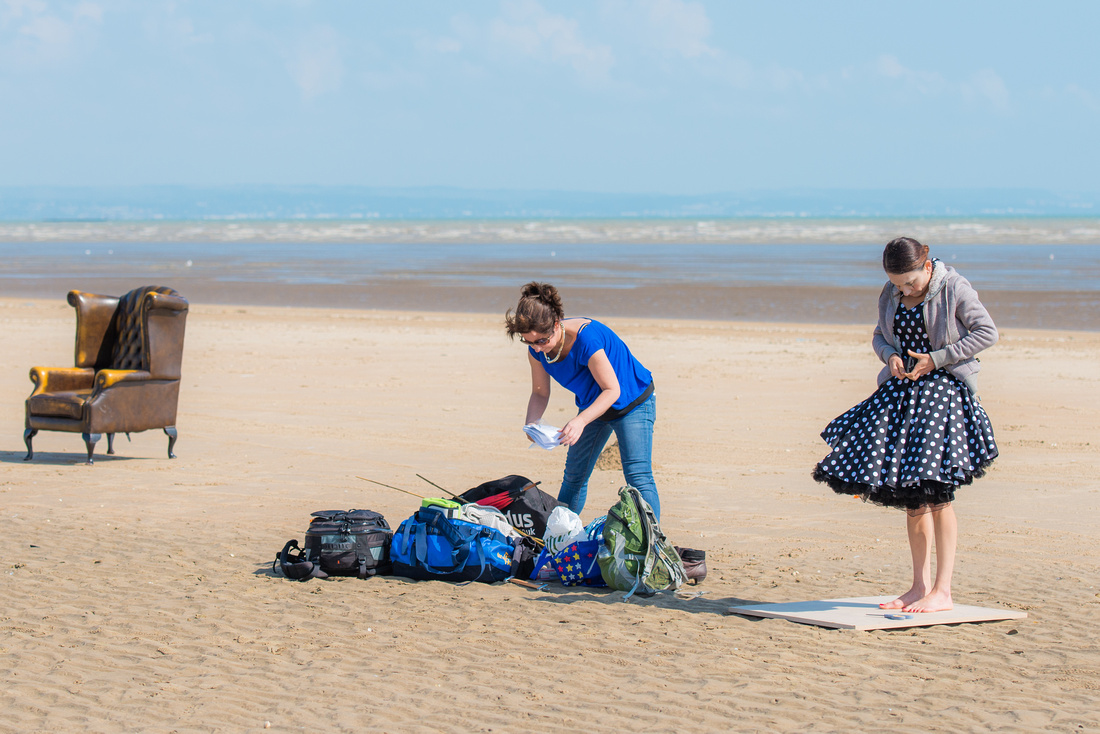 This shoot was about creating images that the viewer won't just flick past on social media but delivering something that's beautiful and a little different. I knew I wanted Chiara in a black dress with white polka dots, right from the beginning it was a must have. I bought the dress from Vivien Of Holloway, I also borrowed dresses from Oh My Honey and Dig For Victory. Once I had all the dresses I popped over to Chiara's place to see what worked and what need altering. Chiara's a very petite woman and the polka dot dress needed taking up a bit for it to look right. For these types of shoot I can't recommend enough checking that clothes definitely fit your model the way you want pre shoot. You'll only end up regretting it on the day if your fighting with clothing that's not looking how you want it. 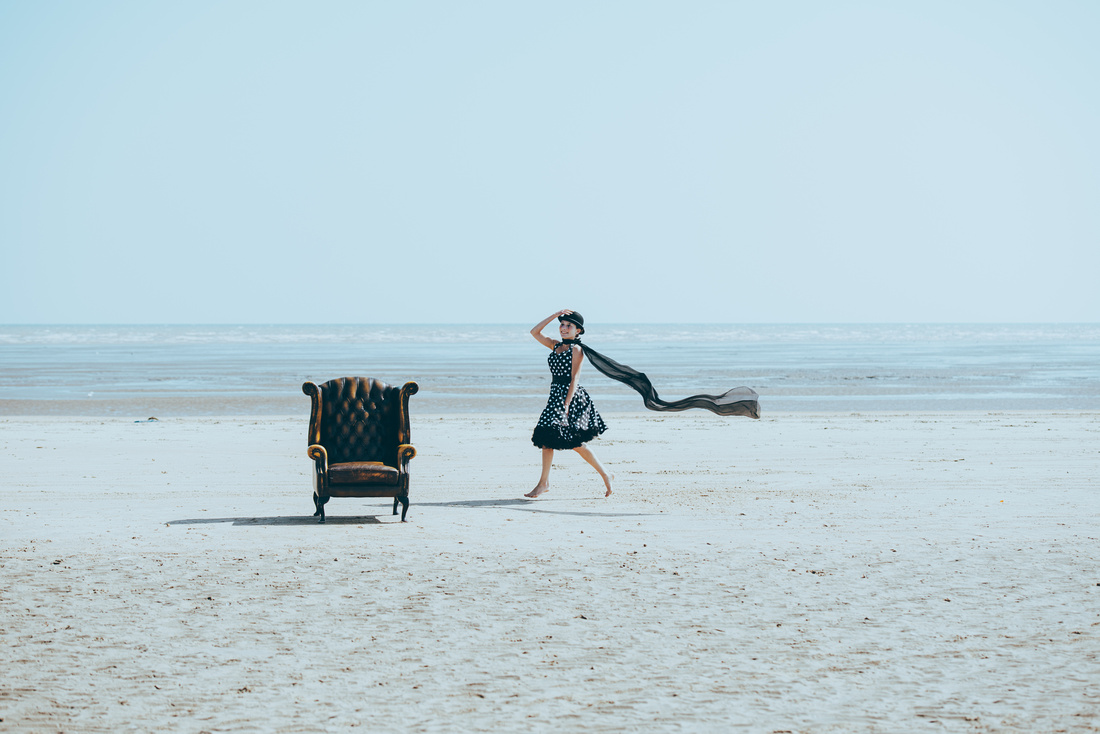 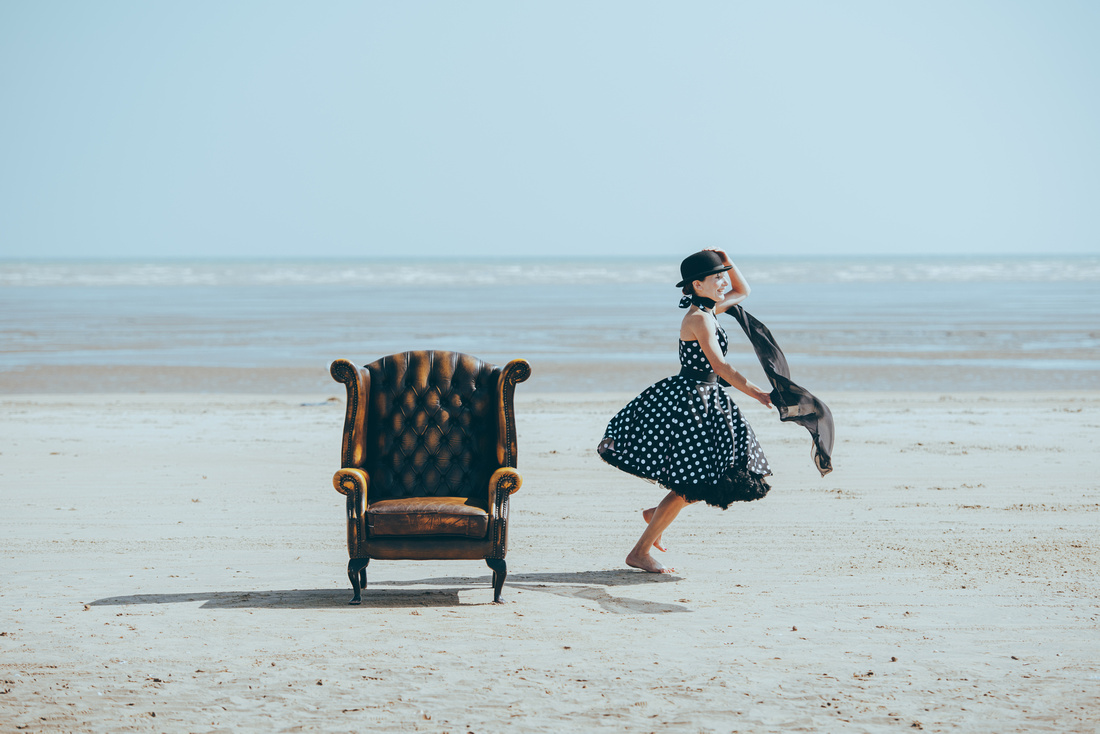 I don't recall where the idea for the vintage leather chair came from but that again was a must have. I came across it when I was having a beer at a pub in Reigate. I approached the manager and said any chance I can borrow that chair for 24 hours? I'll give you a print for your wall from the shoot. He said yes of course and the chair was sorted and fitted perfectly in my car(just). 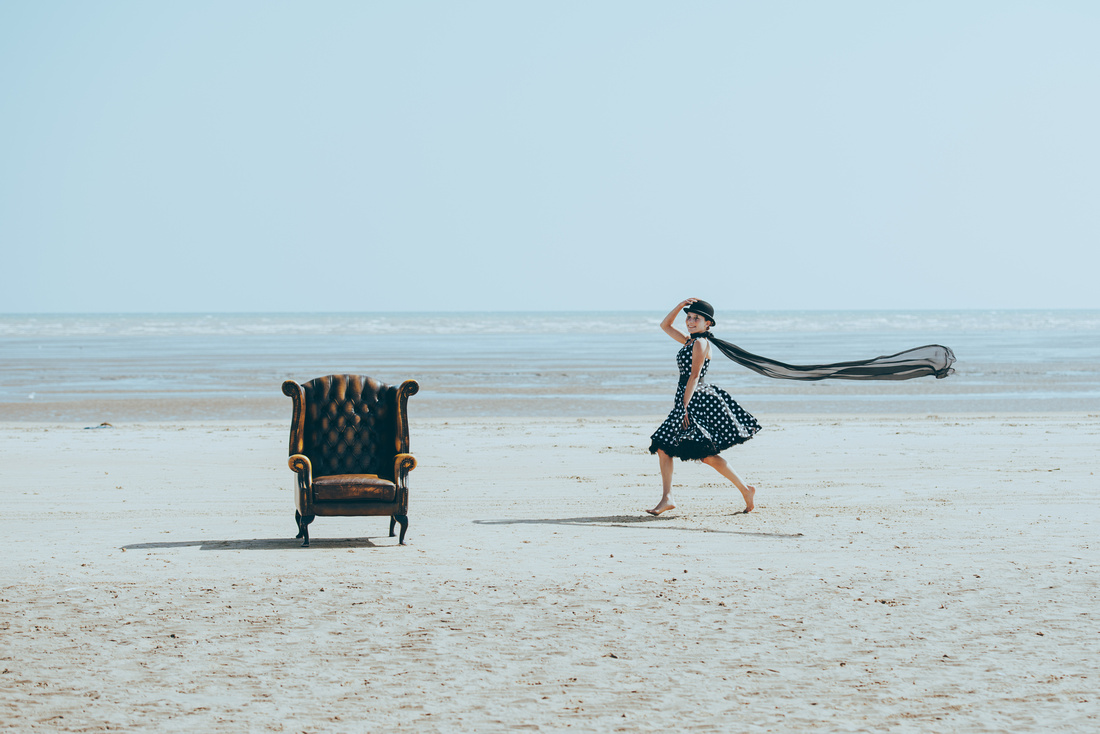 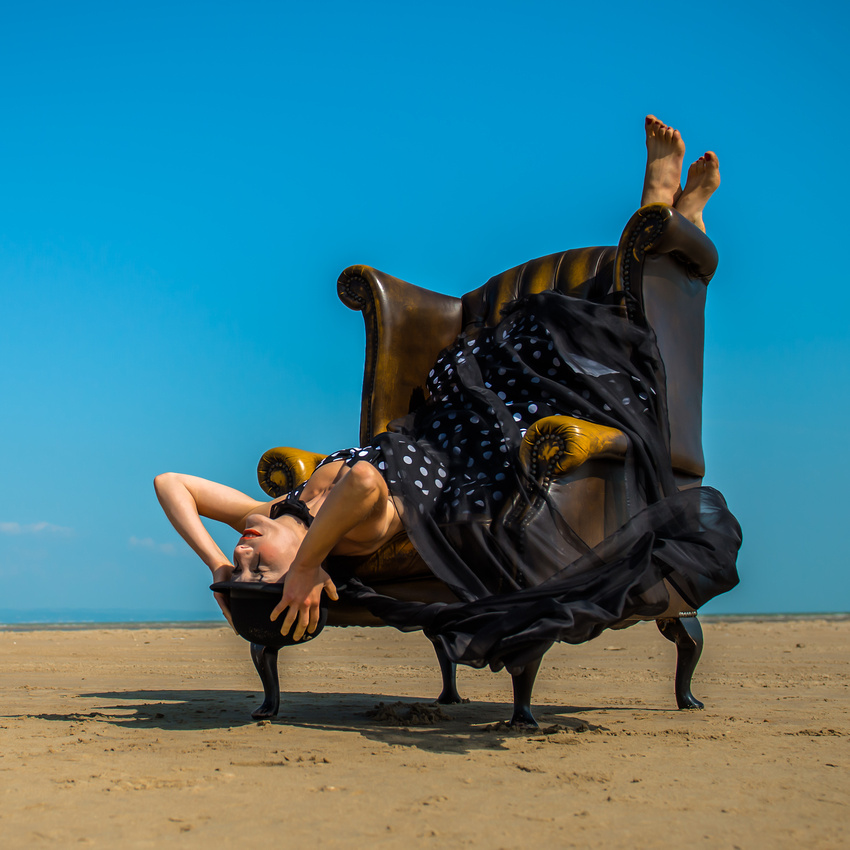 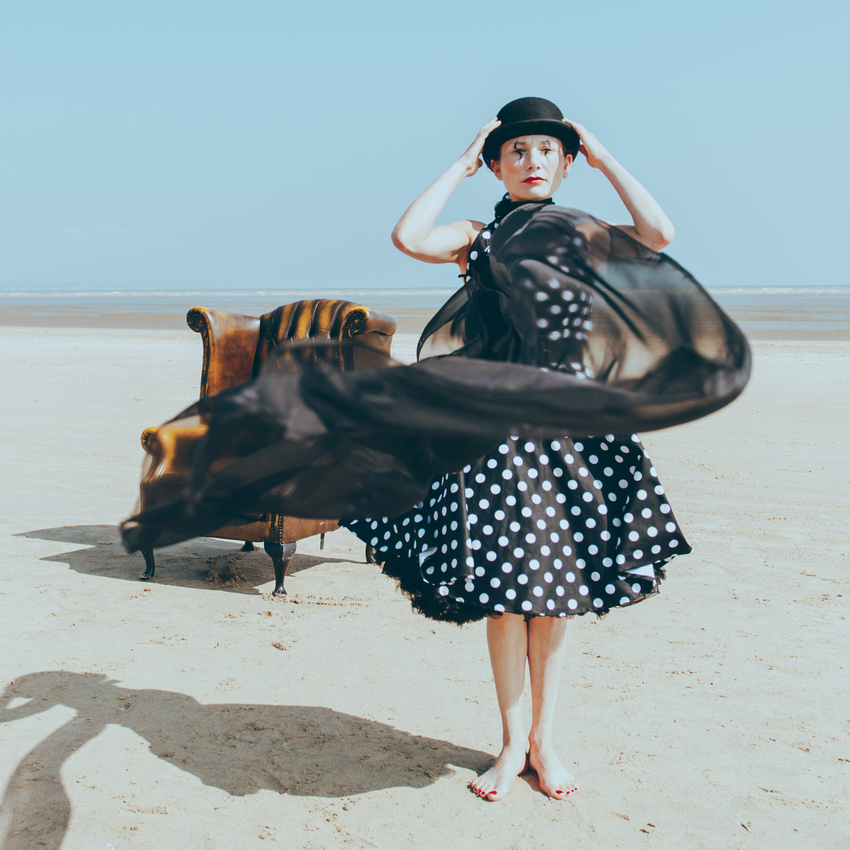 My creative assistant Bryony Eida came up with the idea for the bowler hat which she pinched off her father. It looks fantastic and works really well with the make up. The disco ball is super cool and worked so well out of context like the chair in contrast to where you'd usually see one. The first make up look was a kind of clown/French mime theme I'd come across on Pinterest. The eyes with the long lines going down the face I was very specific about. I like to sit with the models when they have make up put on for personal shoots like this. It's a good time to have a chat and if there are any issues with the make up you can step in say if you'd like any changes. The second make up look was more modest and melancholy. Sophie Bauer the make up artist did a fantastic job. 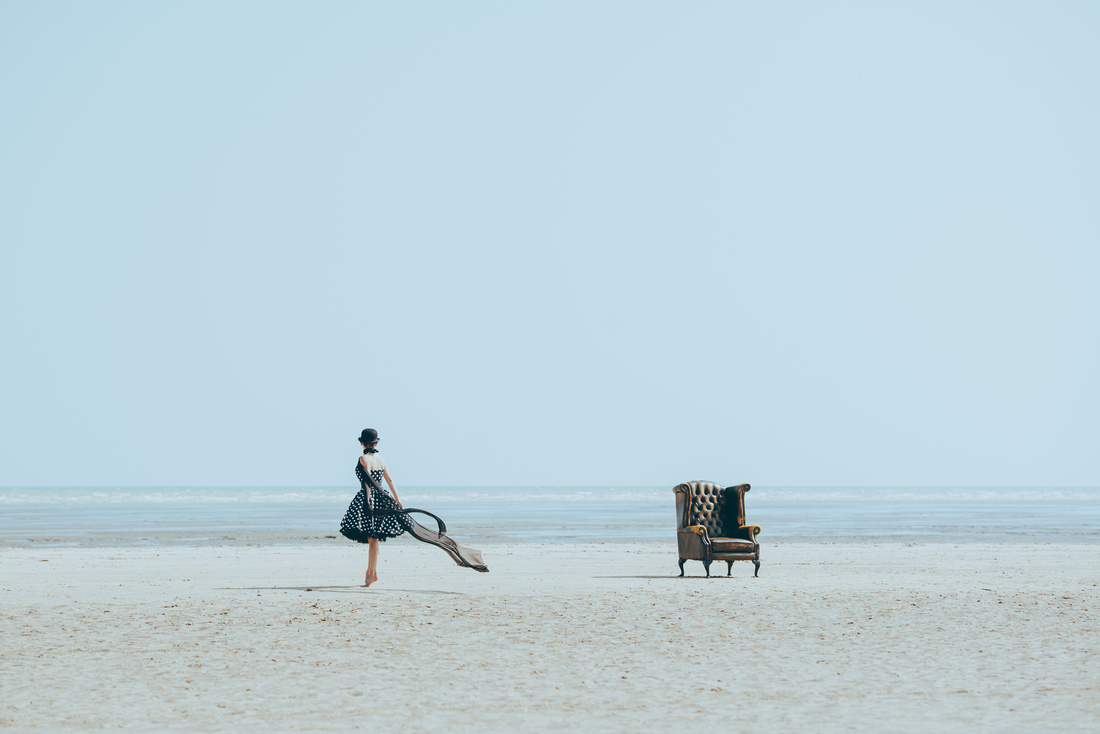 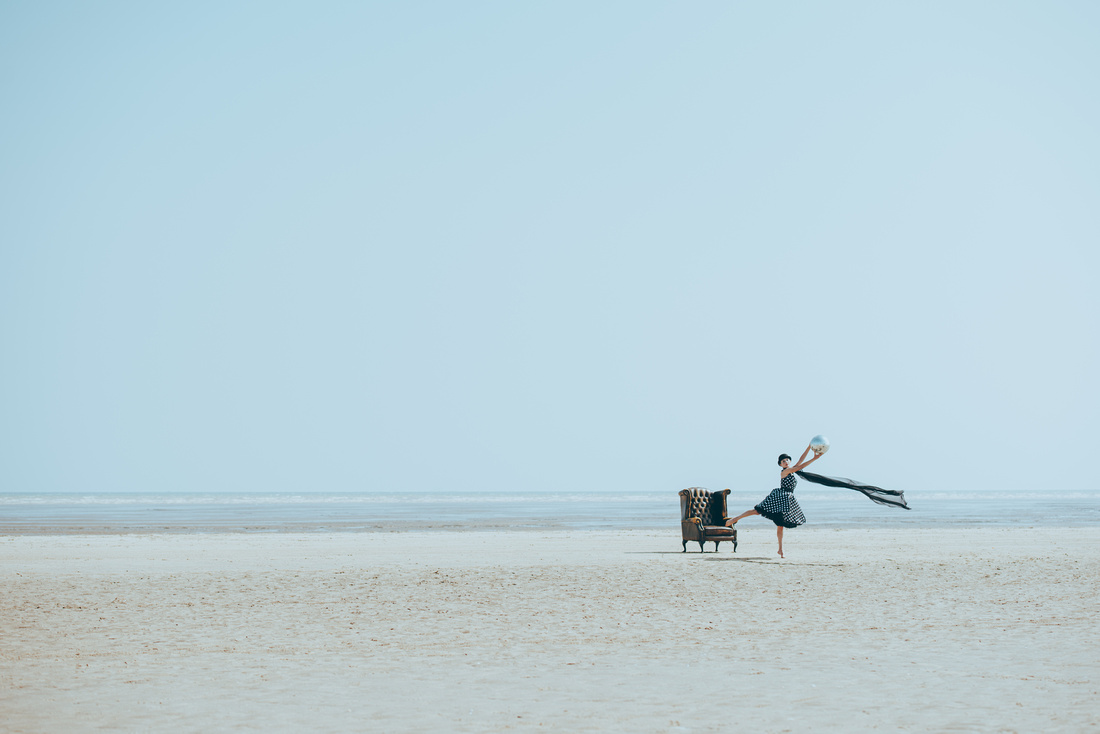 It's amazing how fast the time goes on a shoot like this compared to how much time your actually taking photos for. The travel alone was around four hours altogether. We only had two hours on the beach to make sure we got back in time for the shoot at Unicorn Restoration where we only shooting for an hour. We started at 8am and were finished by 6pm. 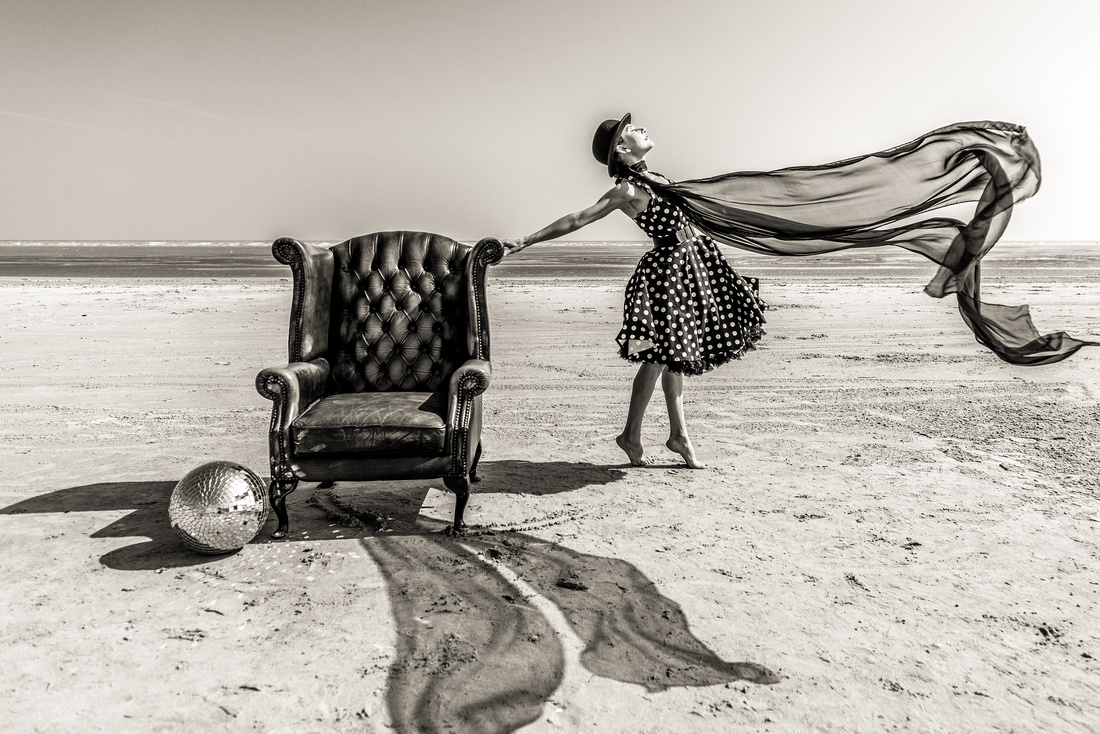 I'd been worried all week that the weather would turn bad on us, when we drove towards Kent the sky was overcast, as we approached Greatstone the sky cleared and then it was blue sky all the way. One thing I hadn't factored in was quite how windy it would be which actually worked in our favour. In one shot the scarf gets caught so perfectly by the wind it looks like it was super imposed into the shot. 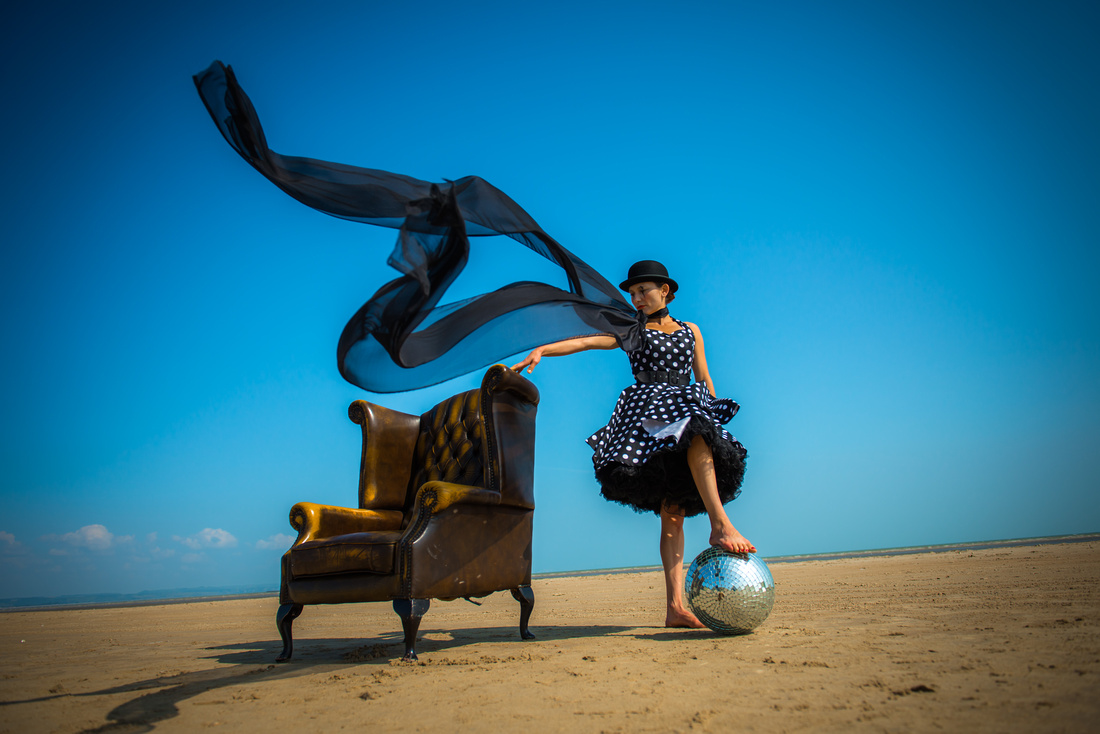 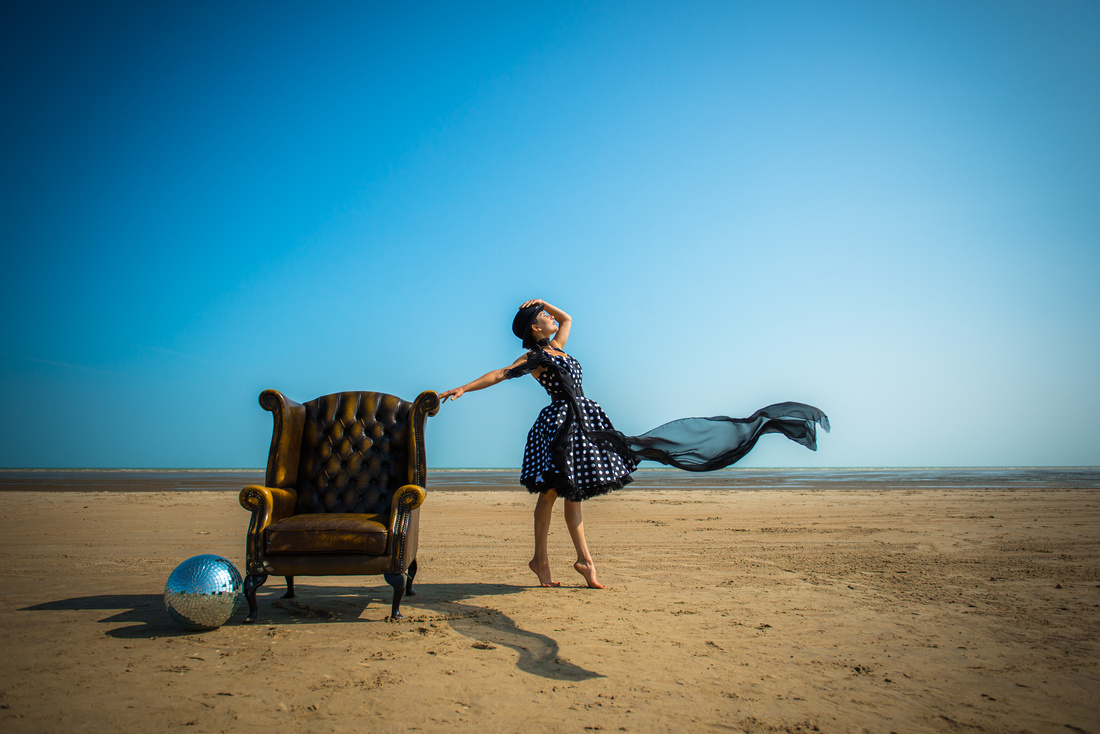 Chiara was superb fun to work with and very beautiful, it's a brave move to get involved with something like this and trust that the photographer is going to deliver something worthwhile. We chatted a lot about movies. Finding out from her about working on film sets was fascinating. 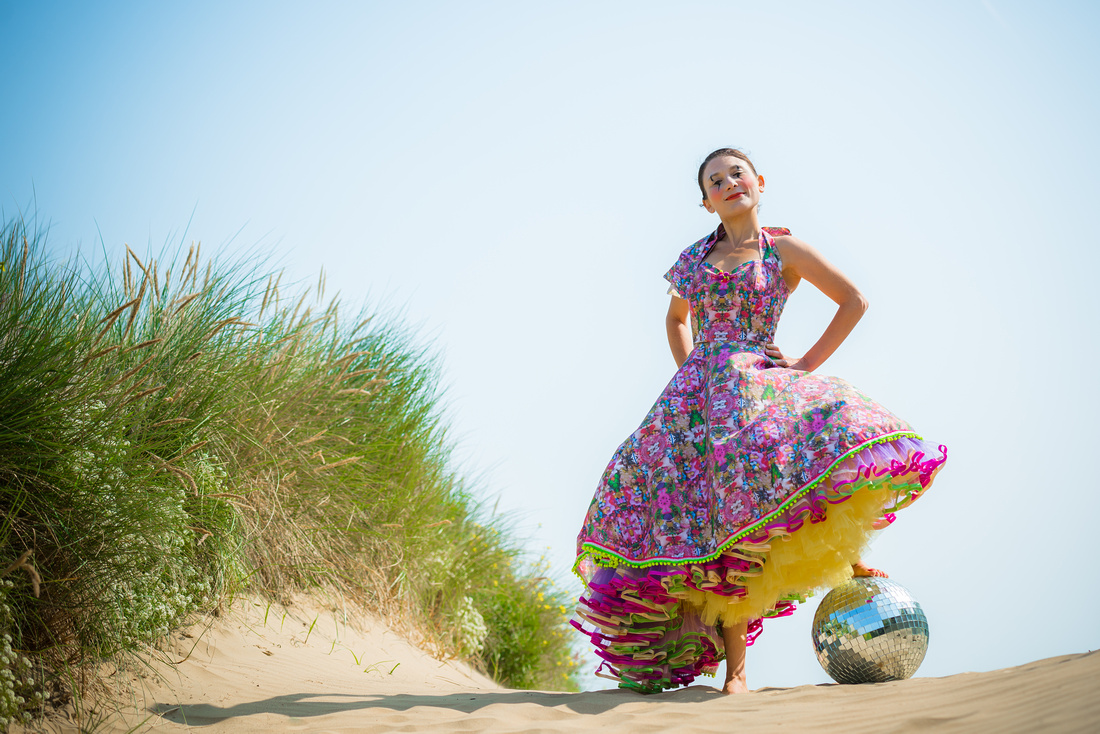 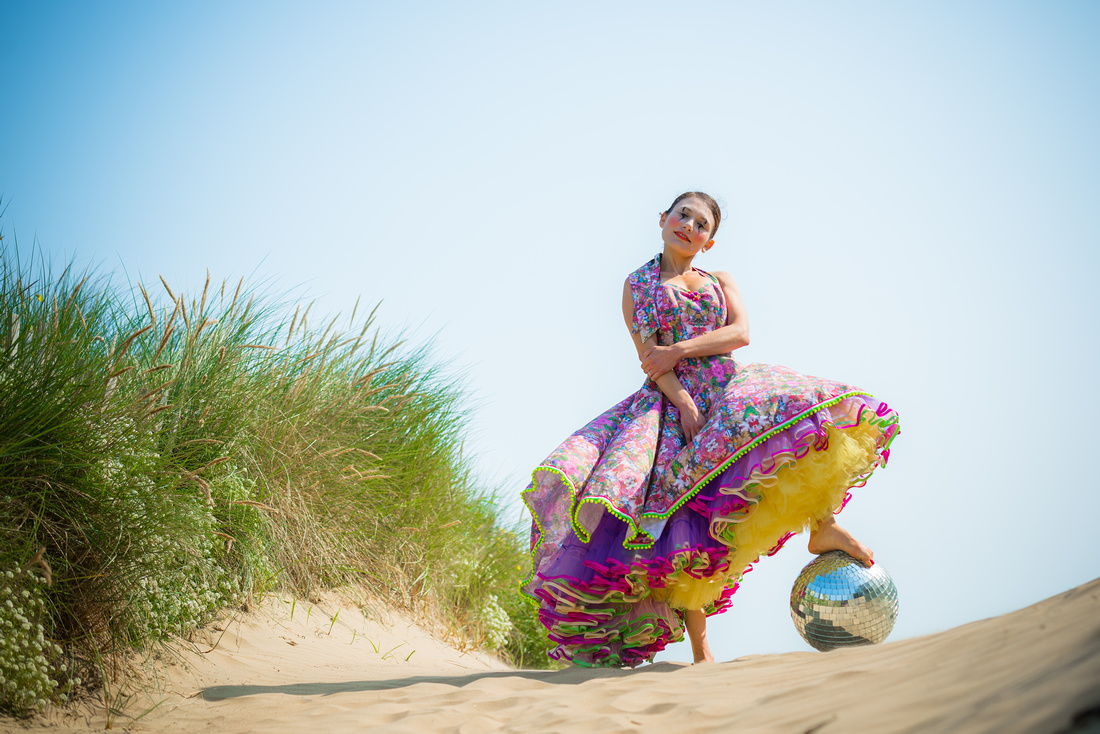 Putting all the different elements together on the beach to see them come together and begin shooting knowing you've got something special is a great feeling. I like pictures that you can't put a particular date on, a timeless quality I guess. I finished the beach shoot with a beautiful dress lent to us by Oh My Honey, the colours pop almost jumping out the picture at you. 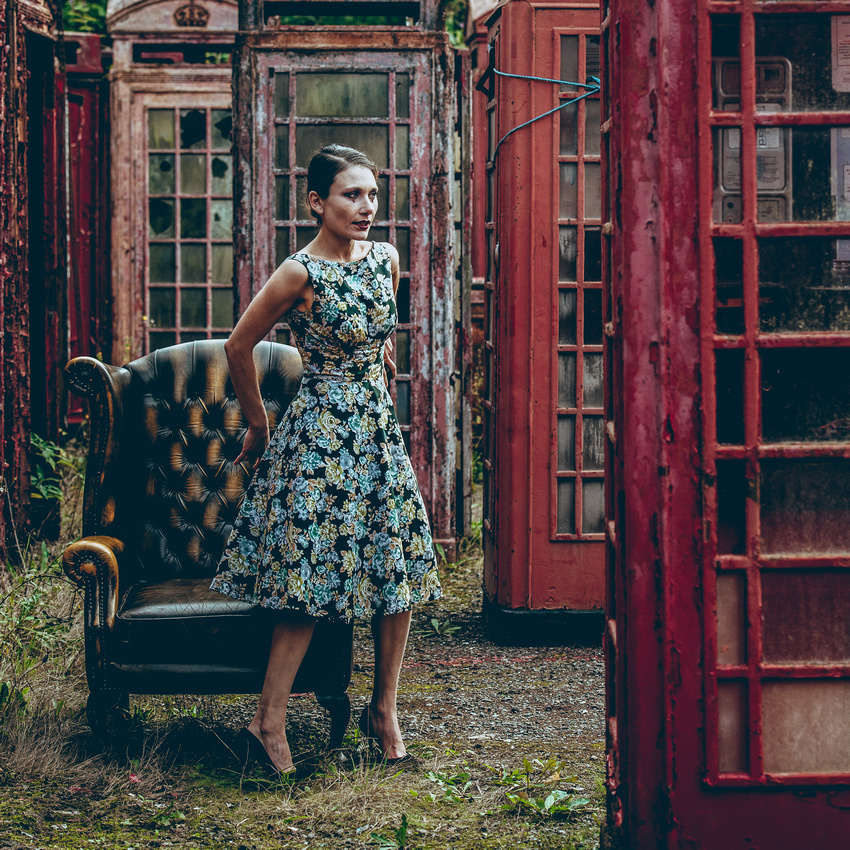 Onto Unicorn Restorations for our second location, it's a mildly haunting place walking around all these identical deteriorating relics from a time gone by. The dress lent to us from Dig For Victory worked so well against the green of unkept grass and the red of the telephone boxes creating striking pictures. We used the vintage arm chair again too. The golden smooth yellow/brown of the leather providing a contrasting texture to phone boxes around it. 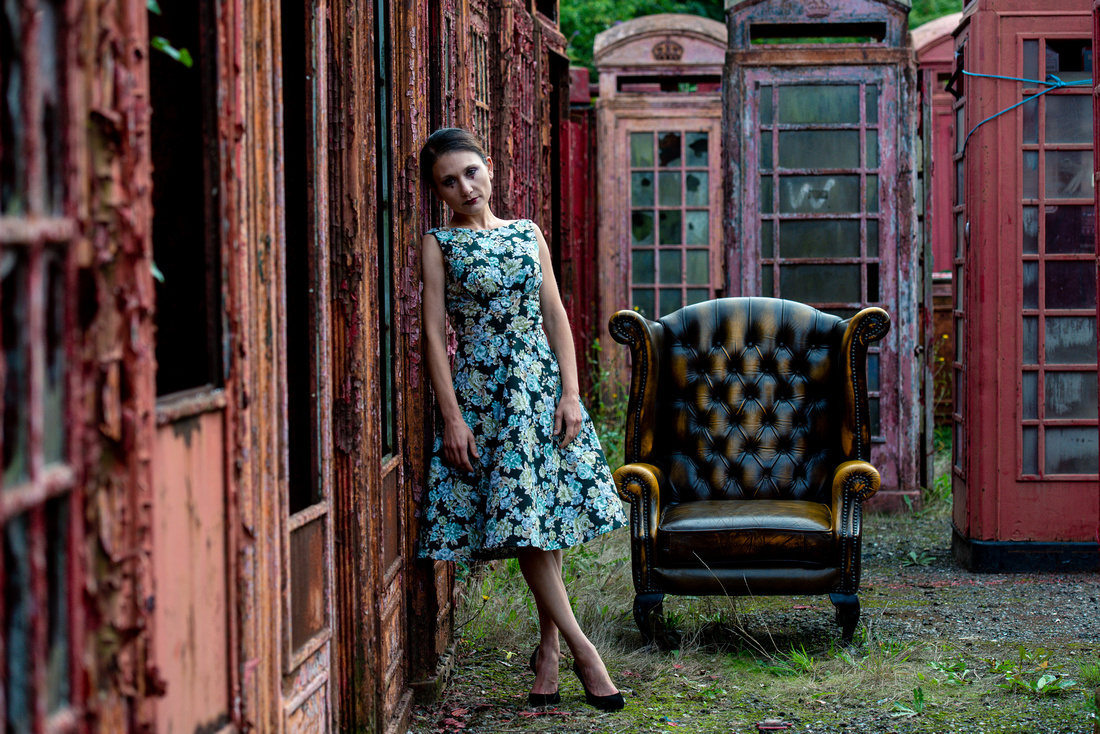 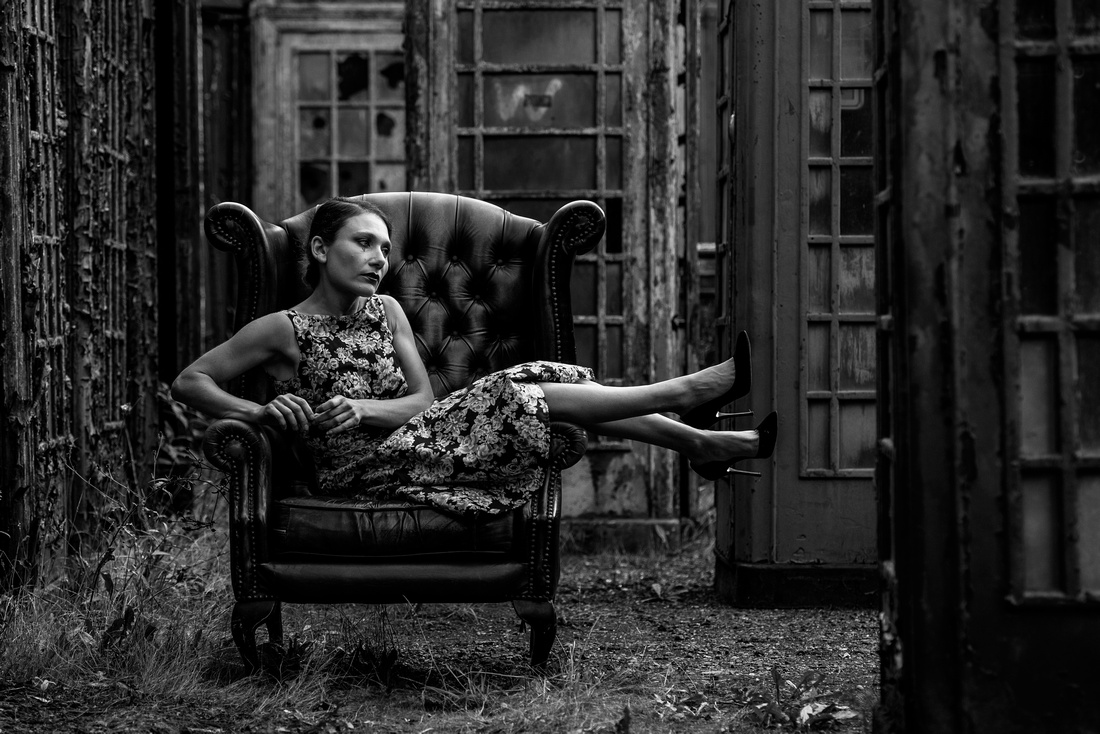 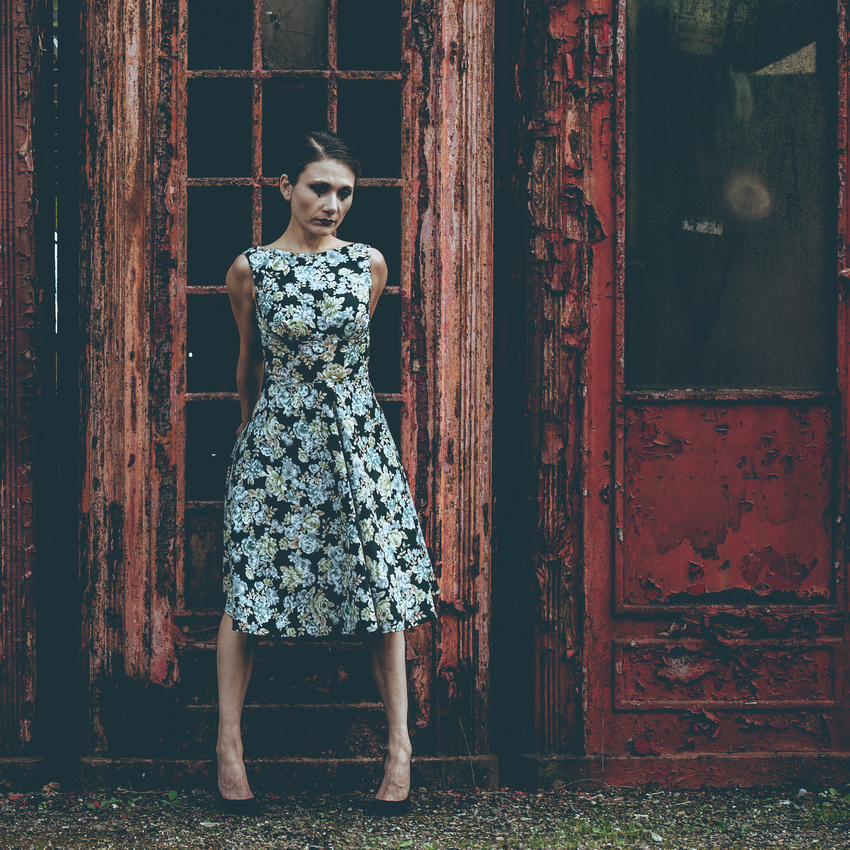 Finally back to my place for a glass of Prosecco to celebrate the days work!

"It was such a great experience to be photographed by Carl! Besides being -by far- the best pictures I have ever had, the overall process was great. From meeting Carl and talking about his ideas to the actual shooting. Carl picked two extraordinary locations and had in his mind the whole 'concept' and aesthetic of the photo shooting including make-up, dresses, props (even an armchair that he found and borrowed from a pub!). I just had to turn up and listen to Carl's directions. It was playful and fun! It was brilliant to play with these 'bizarre' characters that Carl had in mind. I particularly enjoyed the shoot on the beach for the freedom it gave us and the incredible beauty that surrounded us.
The second half of the shooting was far more challenging for me because I'm a terrible model! I'm really bad at posing and I get always very nervous when there is a lens pointing at me : I need to hide behind 'bigger-than -life" characters to cope with the pressure: I find the camera extremely intimidating. My face starts to tense and it feels like the 'real' me is not available anymore..(I guess lots of people including lots of actors and actresses experience the same!). But in this occasion -as challenging as it might have been -  I still had fun because Carl is brilliant in making you feel at ease: he's funny, ironic and fundamentally he's a bloody awesome photographer! Again the location was really inspiring and the whole aesthetic was beautiful. I wish I had been a bit more generous with ideas and responsive to Carl's input.
Overall GREAT! Thank you so much!" - CHIARA

I am now based in Cannes, France in the heart of the French Riviera, if you'd like to book a shoot then please contact me here